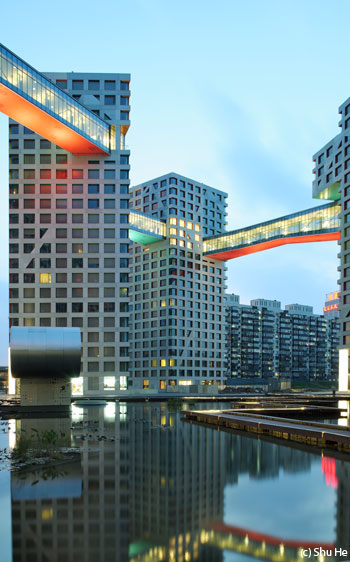 The 220,000 square meter pedestrian-oriented Linked Hybrid complex, sited adjacent to the site of old city wall of Beijing, aims to counter the current privatized urban developments in China by creating a new twenty-first century porous urban space, inviting and open to the public from every side. Filmic urban public space; around, over and through multifaceted spatial layers, as well as the many passages through the project, make the Linked Hybrid an “open city within a city”. The project promotes interactive relations and encourages encounters in the public spaces that vary from commercial, residential, and educational to recreational. The entire complex is a three-dimensional urban space in which buildings on the ground, under the ground and over the ground are fused together.

The ground level offers a number of open passages for all people (residents and visitors) to walk through. These passages ensure a micro-urbanisms of small scale. Shops activate the urban space surrounding the large reflecting pond. On the intermediate level of the lower buildings, public roofs gardens offer tranquil green spaces, and at the top of the eight residential towers private roof gardens are connected to the penthouses. All public functions on the ground level, – including a restaurant, hotel, Montessori school, kindergarten, and cinema – have connections with the green spaces surrounding and penetrating the project. The elevator displaces like a “jump cut” to another series of passages on a higher levels. From the 12th to the 18th floor a multi-functional series of skybridges with a swimming pool, a fitness room, a café, a gallery, auditorium and a mini salon connects the eight residential towers and the hotel tower, and offers spectacular views over the unfolding city. Programmatically this loop aspires to be semi-lattice-like rather than simplistically linear. We hope the public sky-loop and the base-loop will constantly generate random relationships. They will function as social condensers resulting in a special experience of city life to both residents and visitors.

Geo-thermal wells (655 at 100 meters deep) provide Linked Hybrid with cooling in summer and heating in winter, and make it one of the largest green residential projects in the world.